What, If Anything, Is Out There? 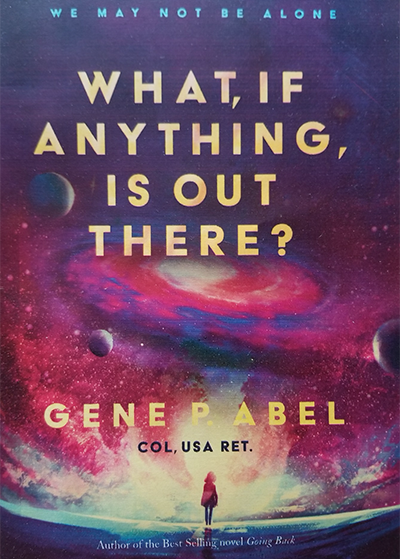 Few events would be important or more startling than if, in the near future, we found ourselves confronted by other intelligent races with abilities and technology far superior to anything that currently exists on Earth. Increased sightings and the acknowledgment by the Department of Defense in July that our Navy encountered UFO’s make this book, WHAT, IF ANYTHING, IS OUT THERE very timely.

The author, Gene P. Abel, COL USA, Ret. details historical events that may well have been sightings by our ancestors. In addition to a thoroughly researched discussion of the Roswell incident in 1947, he explains some of the more important and well-documented sightings since Roswell. Abel applies his military experience to analyze the situation we could find ourselves in if intelligent life outside our planet decided to make direct contact.

This book will help the reader decide if UFO’s are real, it may also stimulate a desire to seek additional information to answer the question, Are we alone in the Universe.

Gene P. Abel has a Bachelor’s of Science in Finance from Penn State University and a Master’s degree in Business Administration from Lehigh University. He has 30 years as a highly successful business executive in both private and public sectors overlaid with his 30 years service as a commissioned officer in the United States Army and Army Reserve. Mr. Abel graduated as a Distinguished Military Graduate from Penn State and spent 5 years on active duty as a Regular Army Officer and 25 years as an Army Reserve Officer. He completed the Army War College in 1985 and was awarded the Meritorious Service Medal on two occasions. he has had such diverse assignments as nuclear weapons officer to finance officer. He was nominated for General Officer and retired as a Colonel in 1993. Mr. Abel has written several political books the latest is Broken Promises and Lies of the Republicans and has just completed an exciting novel, Going Back about two friends who discover they can return to 1919 to prevent Hitler from coming to power.