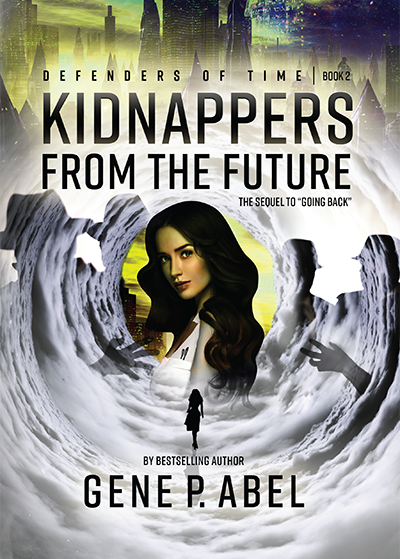 The time travel program is expanding, now with the addition of Dr. Sam Weiss’ niece, Samantha Weiss. Before she can even get on base, however, she, her Uncle, and Special Agent Hessman, encounter a group of Russian terrorists that vanish, leaving behind them a strange type of electrified bullet that no one has seen before. The mystery deepens when later, despite all security precautions, the terrorists once again appear only this time right in the middle of the base and kidnap Samantha away to parts unknown.

With security footage now of the kidnappers and their strange devices in action, along with some tweaking of the temporal scanners by Dr. Weiss, it is determined that these Russians are actually from the future. Why they would want to come back and take Samantha is one of the mysteries set before them as General Karlson orders the team on a mission to the future. Their orders: rescue Samantha and find out why they kidnapped her in the first place.

Besides the difficulty of going into a future where your primitive tech is as outdated as vacuum tubes, there is another complication. For it seems as Special Agent Hessman is falling in love with Samantha.

Gene P. Abel has a Bachelor of Science in Finance from Penn State University and a Master’s degree in Business Administration from Lehigh University. He has 30 years as a highly successful business executive in both private and public sectors overlaid with his 30 years’ service as a commissioned officer in the United States Army and Army Reserve. Mr. Abel graduated as a Distinguished Military Graduate from Penn State and spent 5 years on active duty as a Regular Army Officer and 25 years as an Army Reserve Officer. He completed the Army War College in 1985 and was awarded the Meritorious Service Medal on two occasions. He has had such diverse assignments from a nuclear weapons officer to a finance officer. He was nominated for General Officer and retired in 1993 as a Colonel. Mr. Abel’s last position was the Chief Operating Officer of the third-largest school system in Pennsylvania. After retirement, he began writing several political books including Broken Promises and Lies of the Republicans. He has just completed several exciting novels including, GOING BACK which takes the reader to 1919 to prevent changing history. THE INN OF DESTINY chronicles the efforts of Jackie French to spice up her marriage and the unexpected results from the dreams she and her husband Jerry have on their romantic getaway. His latest non-fiction book, WHAT, IF ANYTHING, IS OUT THERE takes an honest look at Extraterrestrials and if they have been visiting us. In October the sequel to his Best Selling novel, GOING BACK entitled, KIDNAPPERS FROM THE FUTURE will continue the adventures into Time Travel.